As we push IFTF projects forward, we are sometimes reminded of cool things that someone wrote years ago.

For example! Spring is the season of IFComp web development, as our volunteers polish up the web site and add new features for this year’s competition. In the course of that discussion, I was reminded that the IFComp server also handles web authentication for two of other IF competitions — IntroComp and the XYZZY awards.

That is, when you vote in those events, you just use your IFComp login. It’s a minor feature, and I don’t think there was ever a big announcement or discussion about it. Someone worked it up a few years ago and it makes life easier for the XYZZY and IntroComp administrators.

But since IFComp is now an IFTF project, IFTF now has a public single-sign-on service for IF competitions! Again, this wasn’t a bullet point on anybody’s planning outline. It just happened because the IF community (communities) have a lot of nifty bits of tech lying around. And since it’s happened, we get to brag about it. Maybe more IF events will make use of it someday. (Contact us!)

Here’s another bit of tech. In 2014 I wrote a quick prototype of an IF screenshotting tool. I imagined a script that could run through the IF Archive, fire up every game, and render the opening screen as an HTML file (or even an image). Yes, this was inspired by Jason Scott’s screenshot-blaster utility on the Internet Archive.

My original prototype was very crude and I didn’t do anything with it. But it popped into my head when I was writing my Glk talk for BangBangCon. The IF-o-Matic ultimately relies on Glk, my common IF display library API. Any IF interpreter which has a Glk port can be launched and generate output in the same way.

Since giving that talk, I’ve gone back to the IF-o-Matic and refined it quite a bit. Last night I threw in the contents of the IF Archive’s Glulx game directory and it did pretty well! Generated 140 screenshots in a few seconds. 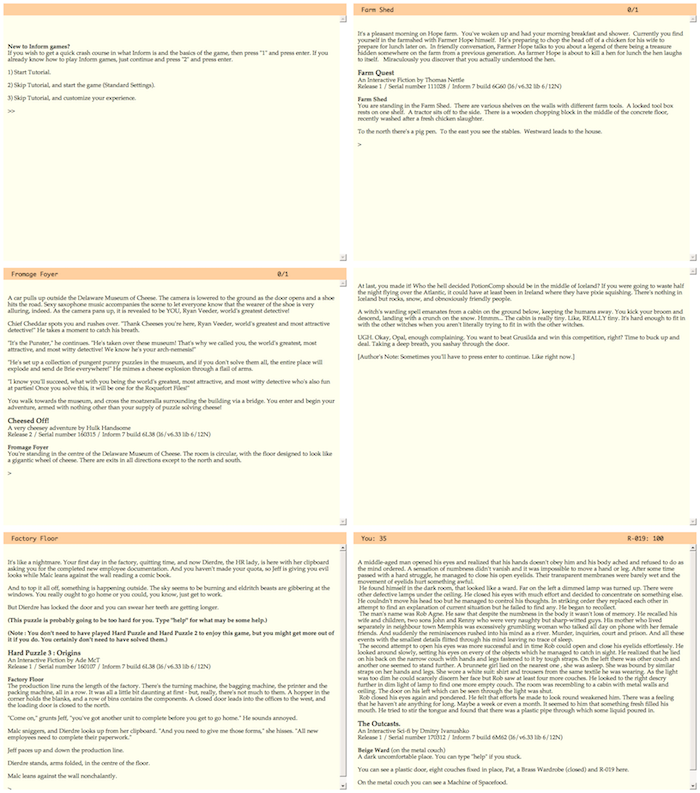 The IF-o-Matic is still missing a bunch of features — unpacking zipped-up game files, displaying graphics. But I’m thinking that this will someday be a standard thing that we run on all Glk-compatible and web-compatible games. You should see these screenshots when you browse IFDB. Maybe I’ll set up a Twitter bot and tweet an IF screenshot every day. Possibilities are vast.